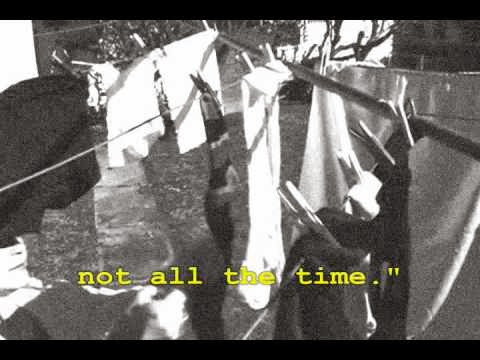 "Clothes Line Saga" might be the craziest of the Basement Tapes songs, and it is certainly the most emblematic of that summer of '67. Dylan tells the story of a family doing chores on a cold day in late January. There's some light, slightly abusive banter between family members, the kind of low-level hum of annoyance that families get when winter cabin fever sets in.

Day 2:
1. Everyone's chief concern upon waking is seeing if the clothes have dried.
2. Dogs bark. Neighbor passes.
3. Neighbor is grinning. He tells mama that the vice president went mad downtown the night before.
4. Mama says, well, that's just the way it goes. The neighbor says we'll have to forget.
5. Mama asks Bob if the clothes are wet.
6. Bob touches his shirt, but the neighbor interrupts his mission. The neighbor wants to know if some of the clothes are Bob's and if he helps out with the chores. Bob tells him "some of them, not all of them" and "sometime, not all the time."
7. Papa tells Bob that mama wants him to come in and bring the clothes.
8. Bob meets mama inside and they shut all the doors.

I can't say whether there's supposed to be some deeper meaning here. The laconic pace and the deadpan, straightforward delivery of the words indicate to me that the song is about nothing more than it claims to be, though various people have suggested anti-war statements regarding Vietnam and the White House, as well as some kind of strange answer to the Ode to Billy Joe. I like it more as an absurd, Luis Bunuel-style short film that's about clothes, neighbors and a family. It fits right in with the strange picture of Ruritania that so much of the rest of the Basement Tapes delivers in that old-timey, weird spooky way that it does.

And here's a delightful cover by a guy Phil J. Gray in his room, wearing a sombrero.