This is an old Scottish borderlands ballad of an aristocrat's wife who flees her life of leisure to live in the wilds with Blackjack Davey, her considerably sexier gypsy lover. This is one of the more popular ballads to survive the past 200 years or so, and has been covered by many singers. This song appears on "Good As I Been to You," the 1992 album of solo acoustic cover songs that Dylan recorded in his garage. Rather than shortening the lyrics to a summary, I'll include them here since I think that Dylan's lyrics are original enough to make it his own, yet are plainly sit atop the work of centuries of developers. "Blackjack Davey" is one of my favorite Dylan songs, and he conveys in here the wild country of the moors, the old-time feel of the setting and the combination of romance, lust, bewilderment and fright that must have overtaken all three characters at least at some point in the acting out of this drama. (In many of the original versions, Johnny Faa the gypsy is caught by the Earl of Cassilis, who hangs him and other gypsies from the Dool Tree, while Lady Jane Hamilton is confined essentially to purdah forever)

"Pull off, pull off them high-heeled shoes
All made of Spanish leather.
Get behind me on my horse
And we'll ride off together,
We'll both go off together."

"Well, saddle for me my coal black stud,
He's speedier than the gray.
I rode all day and I'll ride all night,
And I'll overtake my lady.
I'll bring back my lady."

Well, she pulled off them long blue gloves
All made of the finest leather.
Gave to him her lily-white hand
And said good-bye forever.
Bid farewell forever.

"Last night I slept in a feather bed
Between my husband and baby.
Tonight I lay on the river banks
In the arms of Black Jack Davey, 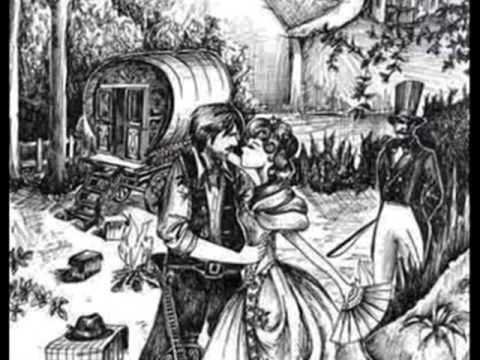 Posted by Robert MacMillan at 2:26 PM