This haiku is a failure, and someday I'm going to fix that. I've written this one about a dozen times, and I can't get it right. Maybe that's because the lyrics aim at defining an atmosphere more than telling a story.

1. Bob sees an "arrow on the doorpost" saying the land is condemned from New Orleans to Jerusalem, and wanders through east Texas where martyrs fell. And then the non-sequitur end of every verse: "And I know no one can sing the blues like Blind Willie McTell."

2. Owl sings to stars above barren trees and "charcoal gypsy maidens" "strut their feathers well" as someone, presumably a circus, takes down tents.

4. Woman and man and a bottle of bootleg whiskey by the river. Chain gang on the highway. Rebels yell.

5. All that's left of God's presence on earth is power, greed and "corruptible seed." Bob, meanwhile, is in the St. James Hotel, looking out the windows, and thinking about how nobody can sing the blues like...

An earlier version of this haiku, the only one that I'm not overly embarrassed to publish, went like this:

The last line is trite and silly. If you have suggestions, I'll take them.

Two versions of the song are here. The first is the 1983 take that was released on the first edition of the Bootleg Series (volumes 1-3). The second take comes from the same period, during the rehearsals and recordings for the "Infidels" album, and features Mark Knopfler of Dire Straits on guitar. 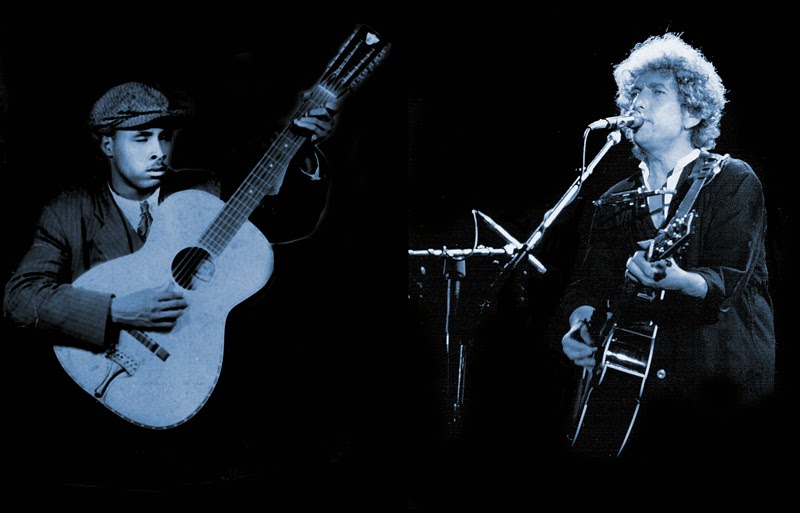 Posted by Robert MacMillan at 10:30 AM