He loves you, but he
Wishes he'd never met you.
That's what "love sick" means.

"Love Sick," the first song on the 1997 album "Time Out of Mind," marked Bob Dylan's official entrance into the house of rockers who are old and wistful and can do no wrong because they've become too old to court critical failure. That sounds cynical, but I don't mean it that way. In Dylan's case, I think it's fully deserved. This song in particular defined the path of Dylan's work and critical reaction to it up to the present. It's a morbid, mysterious and bitter song, and though I wasn't captivated when it came out, my opinion has changed. It's a good one. It's also noteworthy for appearing in a Victoria's Secret commercial. It's pretty hot, though I don't buy an underwear-clad angel in a cowboy hat. Also check the "soy bomb" moment that this song encountered when Dylan performed it at the 40th Grammy Awards show.

I’m walking through streets that are dead
Walking, walking with you in my head
My feet are so tired, my brain is so wired
And the clouds are weeping

I see, I see lovers in the meadow
I see, I see silhouettes in the window
I watch them ’til they’re gone and they leave me hanging on
To a shadow

I’m sick of love; I hear the clock tick
This kind of love; I’m love sick

Sometimes the silence can be like the thunder
Sometimes I feel like I’m being plowed under
Could you ever be true? I think of you
And I wonder 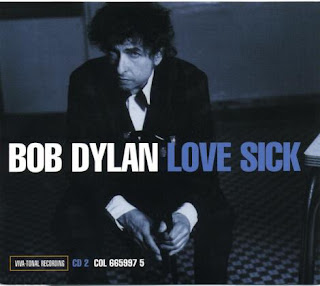 Posted by Robert MacMillan at 12:33 PM