This song was a Bobby Bare hit in 1959, a pastiche of sorts of Elvis Presley's rise to fame and his subsequent drafting into the Army. It features lyrics like this:

I split for Memphis where they say 'you all' And them swinging cats are a havin a ball. Yeah, they love me down there, guitar picks and all. I was rocking and bopping and getting all the breaks, And the girls all said that I had what it takes, When up steps a man with a big cigar. He said. "Come here, kid. I'm gonna make you a star." Put you on "Bandstand', buy you a cadillac. Sign here, kid." So I signed my name and became a star, having a ball with my guitar. Driving a big, long cadillac. And fighting the girls off'n my back. But they just keep a comin, screaming, they love it. So I picked my guitar with a great big grin And the money just kept on rollin in. And then one day my Uncle Sam said (thump, thump, thump) "here I am!

Dylan and The Band kept the basic structure when they recorded it during the Basement Tapes sessions in upstate New York, but it sounds like wine, whiskey and weed, along with the relaxed atmosphere and Dylan's penchant during the sessions for trying out all kinds of nonsense lyrics, produced a new song:

Well, I bought me a guitar, put it in tune Went out there the month of June 'Twas a hot dog night and a stick in a roar Everybody was a-down on this side. There was a holy cow (holy cow) Mean cow (mean cow) Double jaw (double jaw) Cow (cow). And

Yes, you'll be makin' 'em little girlies giggle You'll be makin' 'em all just jump up an' down an' wiggle Empty their socks, in their britches All you'll find that soon you'll be itches. Itches all over Itch in your pants Itch while you dance Itchin' on down to the corn' of France.

Songs with this kind of flat delivery offer a bit too much to lampoon in a haiku, so it's best to take the 17-syllable headline approach. 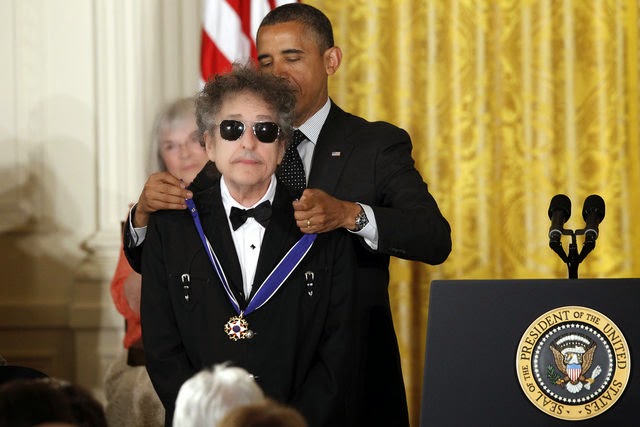 Posted by Robert MacMillan at 10:42 AM