The Ballad of Frankie Lee and Judas Priest

Frankie Lee wants what
Judas has. He scrounges, which
Proves his undoing.

This was recorded in 1967 for the "John Wesley Harding" album, that mysterious collection of cowboy tales, love songs and hardwood proverbs from the murky borderline between the western frontier and the Old Testament. This is one of the most haunting songs that Bob Dylan ever wrote, and the simple guitar-bass-drums-harmonica arrangement of the ballad give it the surreal quality of horror movies in which the scary stuff happens in the bright light of day.

In short:
1. Frankie needs some money. Judas offers him a bunch of $10 bills and says take your pick.
2. Frankie's ready to take, but he doesn't like Judas watching him do it.
3. Judas winks and says, sure, fine, OK, I'll be down the road in "eternity," and they'll meet up in some time. Frankie says he doesn't believe in eternity.
4. Frankie's working on his money when a stranger says Judas is calling him from a house down the road.
5. Frankie sees the house and notes that there are 24 women in there, presumably hot ones.
6. He goes on a 17-day tear inside the house, then dies in Judas's arms.
7. They bury Frankie Lee, and a little "neighbor boy," unmentioned until now, says nothing is revealed.
8. Maybe that's not true because Bob has something to say:

Well, the moral of the story
The moral of this song
Is simply that one should never be
Where one does not belong
So when you see your neighbor carryin’ somethin’
Help him with his load
And don’t go mistaking Paradise

For that home across the road

As far as instructions for life that are nearly biblical in their simplicity and grace go, this is one that's worth learning, but hard to accept. 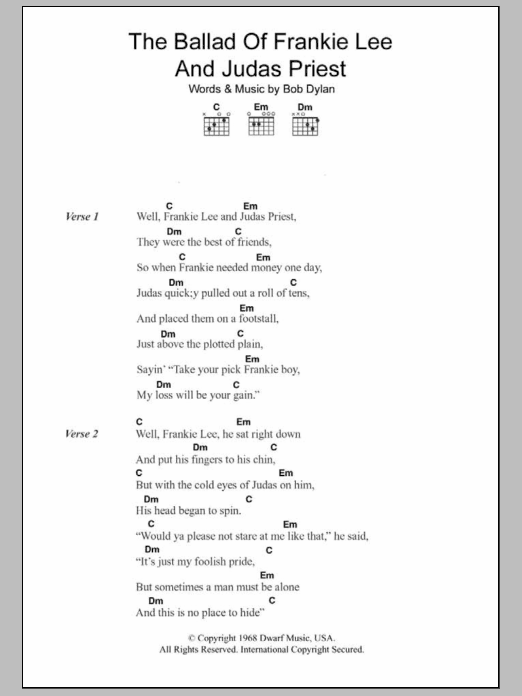