All Along the Watchtower

Two stories in one, making this a 2-1/2 minute epic of inscrutability:
1. The joker's sick of being exploited by businessmen and farmers, while the thief adjusts the joker's vantage point to the longest-term view that there is: when you're dead, you won't care. There's some cold comfort for your one more cup of coffee.
2. The princess walks along a watchtower, attended by women and barefoot servants. It's nasty outside: howling wind, cold weather, a growling wildcat and two unidentified people approaching, presumably on horseback. Enjoy the rest of your day.

As usual, the atmosphere is the key here, and like many of the other minimalist songs on 1967's "John Wesley Harding" album, it's Nashville country-and-western style doom and gloom. I've read the word "apocalypse" many times as a key association with this song, and it's not hard to see why. Chapter 1 opens with despair and fatalism, chapter 2 provides a peripatetic princess on a parapet, presumably in peril. Whatever the song might be "about," the foreboding tone is all too apparent, and the compact size of the song gives it an extra chill. The Jimi Hendrix big-ass-guitar version is the opposite, but no less effective or fun to listen to. As for the haiku, I couldn't ignore one half of the story for the other, so I went for the Cliff's Notes version of the joker and the thief, then I sacrificed the riders, the wildcat, the women and the servants. You gotta be cruel to be kind.

Here are the Jimi and Bob versions. I don't know if the links are working. They render for me, but I can't open them. If they fail for enough of you, I'll remove them.

And here is a version of Dylan doing the song in concert in Oslo, 2013. 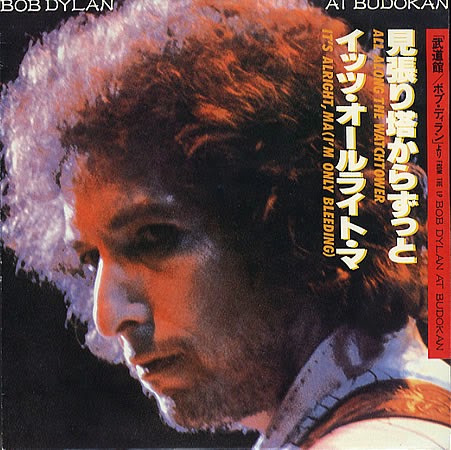 Labels: 1967, All Along the Watchtower, Jimi Hendriix, John Wesley Harding