Diamond Joe (Good As I Been to You)

Joe hires cowboy
Who hates his lying, cheap ways,
But Joe has him trapped.

I'm a sucker for "Good As I Been to You" album. It's a windswept, melancholy collection of songs, mostly old songs and traditionals, done by Dylan after the failure of his album "Under the Red Sky." It was released in 1992 and is the bookend to "World Gone Wrong," a similar album that he released one year later, but with a tilt more toward blues songs than ballads. He moves from the high seas of the Indian and Atlantic oceans (doomed sailors and convicts) to the chaparral of the old west and the morbid thoughts that descend on revelers in southern parlors, sort of like The Masque of the Red Death (I'm thinking of "Hard Times" by Stephen Foster). He also covers lots of ground in between, whether performing Elvis Presley songs, Frankie and Johnny murder ballads, or scary old children's songs like "Froggie Went a-Courting."

"Diamond Joe" is a traditional song about a cowboy hired by a Texas ranch baron who finds himself exploited beyond his wildest imagining. The oldest version that I can find is by Cisco Houston, but I see that Ramblin' Jack Elliott covered it too. Bob's version is far more weary in its delivery than the other two, and is irresistible.

Here are the lyrics:

Now There's a man you'll hear about
Most anywhere you go,
And his holdings are in Texas
And his name is Diamond Joe.

And he carries all his money
In a diamond-studded jar.
He never took much trouble
With the process of the law.

I hired out to Diamond Joe, boys,
Did offer him my hand,
He gave a string of horses
So old they could not stand.

And I nearly starved to death, boys,
He did mistreat me so,
And I never saved a dollar
In the pay of Diamond Joe.

Now his bread it was corn dodger
And his meat you couldn't chaw,
Nearly drove me crazy
With the waggin' of his jaw.

And the tellin' of his story,
Mean to let you know
That there never was a rounder
That could lie like Diamond Joe.

Now, I tried three times to quit him,
But he did argue so
I'm still punchin' cattle
In the pay of Diamond Joe.

And when I'm called up yonder
And it's my time to go,
Give my blankets to my buddies
Give the fleas to Diamond Joe. 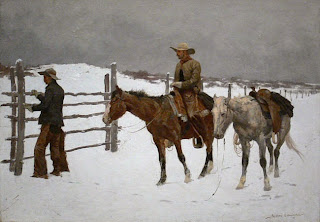 Posted by Robert MacMillan at 3:48 PM