He still dreams of you
After a life on the stage.
He's going insane.

"Dreamin' of You" didn't make the "Oh Mercy" album so Sony released it on the eighth volume of the Bootleg Series. It's another in the shifting series of autumnal Dylan songs -- bittersweet, lonely, searching kind of stuff. The music video, starring Harry Dean Stanton, centers on the old alterna-rock myth of a lonely man wearing a suit, driving in the desert. It's not Harry Dean Stanton's first road-trip through the hipper-than-thou wastes of the southwestern United States. Wim Wenders cast him in the unlovable loser role in the film "Paris Texas" from 1984, but here he stumbles across an old stash of Dylan records in a garage, rather than his estranged wife Nastassja Kinski in a peep show booth. "Dreamin' of You" is strictly Austin cool with a side of mesquite and ominous rumblings of destiny. You know...

1. For whom do those bells toll? I'll give you three guesses.
2. I'm in pain, dreaming of you, going insane. Shadowy past etc etc.
3. I wish we were together. It won't happen tonight.
4. I was locked in a cage on the stage. Nobody told me why (I was a rock star)
5. I'm like a ghost in love. I'm separated from everybody. I miss you, hence insane.
6. A brief report on the weather.
7. I'm on the run. Missing you, hence insane. 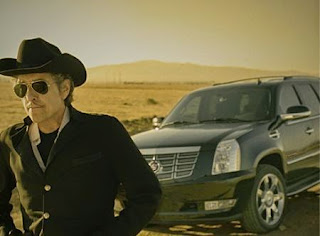 Posted by Robert MacMillan at 3:05 PM