Dignity: it's more
Than a word. Everyone knows,
But really, they don't.

"Dignity" is the great Bob Dylan anthem that wasn't. Like Sam Peckinpah's movies "The Osterman Weekend," "Pat Garrett and Billy the Kid" and "Major Dundee," I don't think there's one finished version that matches what Dylan was searching for in this song. Dylan and producer Daniel Lanois intended the song to appear on 1989's "Oh Mercy" album, but repeated takes failed to produce what they were looking for. In Dylan's book, "Chronicles, Vol. 1," he says everyone eventually got fed up and abandoned the track. I heard it first on the 1995 "MTV Unplugged" album, and then on a single featuring various edits. You can hear a version on the "Greatest Hits Vol. 3" album as well as other versions on volume 8 of the Bootleg Series. The song, as far as I can tell, focuses on the antics of various characters as they search for the one trait that eludes them as well as Bob.

Who's looking for dignity and in which ironic places he or she looks:
- Fat man/blade of steel
- Thin man/last meal
- Hollow man/cottonfield
- Wise man/blade of grass
- Young man/passing shadows
- Poor man/painted glass
- New Year's eve party (somebody was murdered just after dignity phoned for a cab)
- Bob/city-town-midnight sun
- Bob/the police
- Blind man/trance/pockets of chance/circumstance like pocket lint
- Bob/Mary Lou's wedding (She has a deadly secret and an aversion to being seen with Bob)
- Bob/Where the vultures feed
- Bob/asking the maid while the house is on fire, his gets go unpaid and the cold winds blow
- Drinking man/crowded room with obscured mirrors/lost forgotten years
- Bob/Prince Phillip at the house of blues (he speaks on condition that he gets paid and can speak off the record. He has a bone to pick with dignity)
- Bob/sons of darkness and sons of light in the bordertowns of despair
- Bob/in a river on a boat reading a note
- Sick man/doctor/masterpieces of literature
- Englishman/in the wind
- Unidentified person with a photograph that he claims is dignity, but Bob says no one has taken a picture of dignity
- Bob/the red and the black and the valley of dry bone dreams
- Bob/the edge of the lake (he gives up here) 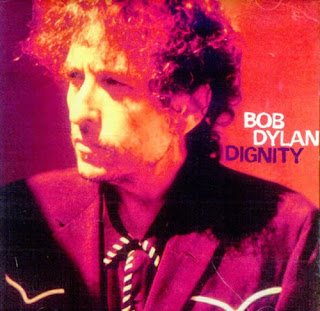