The Devil's Been Busy

People are wrapped up
In their own troubles, while the
World goes to hell.

This is one of those collaborative "sound of 1,000 acoustic guitars strumming" Traveling Wilburys efforts. From "Vol. 3," their second album, "The Devil's Been Busy" starts off with two verses about the suffering environment. Tom Petty sings about poison sprayed on the golf course, with members of the county club too busy sinking birdies and keeping scorecards to care. Then there are the lines about trucks of toxic waste driving down the highway, with no place to stash it, barring outer space. From there, Dylan takes over, and the lyrics grow more abstract. He delivers a verse about your second cousin and how he was wasted in a fight, then acting in a western, and then a mysterious aphorism:

Sometimes they say you're wicked
But you know that can't be bad.
Sometimes you're better off not knowing,
It'll only make you sad.

Jeff Lynne rounds it all up with some reference to unnamed people coming down Picadilly, "dripping at the dash" and "Wasting sticky Willy, covering him with their cash." They're beating Willy, whoever he is, just like Bob's second cousin earlier in the song. The only reference I can find anywhere else to sticky willy says that it's an it, not a he. In particular, it's a weed, otherwise known as galium aparine, clivers, goosegrass, catchweed, stickyweed, sticky willow, velcro weed and grip grass. It causes contact dermatitis, but you can make a tea from it and it is edible if cooked before its fruits appear.

Here is the song, which has a pleasant sitar riff that appears regularly. 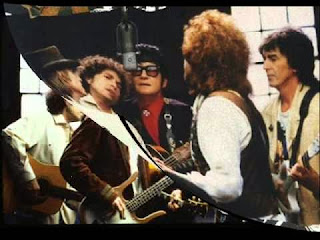