Down Along the Cove

Bob meets his girlfriend
Down along the cove. And then
They take a short walk.

The 1967 album "John Wesley Harding" is the shortest, sparest, densest album in my collection. It's full of gnomic Biblical references, spooky American morality tales, the apocalyptic landscape of "All Along the Watchtower," and a variety of old, weird tales about gunslingers, co-dependent friends, Tom Paine, divine intervention, evil immigrants and wicked messengers and lonesome hobos. Then there are the last two songs, which are performed by the same musicians and apparently from the same sessions, but they seem like they arrived from another album. The first of the two is "Down Along the Cove," which is one of my favorite Bob songs. It's about exactly what you think: Bob and his girl go for a walk along the cove. They're obviously in love, and everybody knows it, and what's more, everybody understands why. That's called living the dream. Even better is the pedal steel guitar that spices up the song.

Here's a live version from 1999, apparently its debut in the Dylan touring repertory. Below it is the original, sparkling album cut. 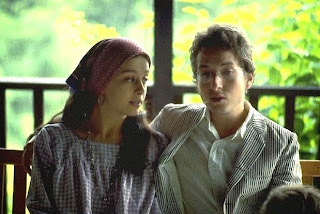 Posted by Robert MacMillan at 2:08 PM

Labels: 1967, Down Along the Cove, John Wesley Harding