The Death of Emmett Till

Emmett Till was a black teenager, murdered by Roy Bryant and J.W. Milam in 1955 because they took offense when he spoke to Bryant's wife, 21-year-old Carolyn Bryant. They beat him in a barn, gouged out one of his eyes, shot him in the head and dumped him in the Tallahatchie River. The tied a 70-pound cotton gin fan around his neck with barbed wire. His mother insisted on an open casket at the funeral to bring attention to the brutality of the crime and to raise attention to racism in the United States. A jury acquitted Bryant and Milam, who later told Look magazine that they killed Till.

Dylan's song, copyrighted in 1963, appears on the Witmark Demos in the Bootleg Series. It's one of his "journalism songs," as I call them, in the same vein as "The Lonesome Death of Hattie Carroll" or "Who Killed Davey Moore?" Or, for that matter, "Hurricane." He lets his indignation show, and saves up some for the end when he more or less accuses his listeners of apathy. If the song suffers at all, it's more in delivery than in spirit. Some critics say the lyrics are earnest to the point of silliness, and I do think that they could have been stronger with more subtlety. But what can you do.

If you can’t speak out against this kind of thing, a crime that’s so unjust
Your eyes are filled with dead men’s dirt, your mind is filled with dust
Your arms and legs they must be in shackles and chains, and your blood
it must refuse to flow
For you let this human race fall down so God-awful low!

This song is just a reminder to remind your fellow man
That this kind of thing still lives today in that ghost-robed Ku Klux Klan
But if all of us folks that thinks alike, if we gave all we could give
We could make this great land of ours a greater place to live

Here is a version of the song that he performed on WBAI radio with Cynthia Gooding in 1962. Don't miss his commentary before the song on how he stole the chords from another folksinger. 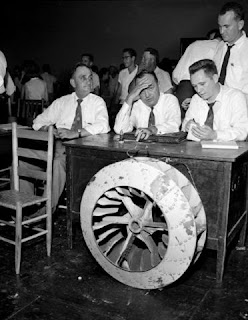 Posted by Robert MacMillan at 2:02 PM