The early Roman kings to whom Bob seems to refer are the street gang as well as the actual early Roman kings. In Rome. This song appears on "Tempest," which came out in 2012. It's a combination of allusions to both groups of kings, and a comparison between Bob's physical (particularly amatory) skills and the toughness of the gangs, even though he's going on 200 or 300 years old.

Here's a verse-by-verse breakdown by a user of the Dylan fan forum Expecting Rain. It's funnier and more on point than anything I could have come up with:

Verse 1: Roman Kings were an early gang, probably in New York, tough S.O.B.'s who ruled the place. Don't mess with them.
Verse 2: The actual Early Roman Kings, and the Romans in general, took care of business. They even put a pretty major dude to death on a Friday.
Verse 3: Continuation of the second verse, but more of a mythical combination of ancient and modern. They're legendary, these dudes.
Verse 4: Classic blues singer bragging. Don't mess with me baby, I'm like an Early Roman King, and I'm tricky.
Verse 5: Oh, by the way, when I said "I," I was talking about myself, the devil. Satan. Beelzebub. Death. Whatever it is you fear, that's me. I'm evil.
Verse 6: The apocalypse is coming, and I'm going to enjoy it. You people, all of you, are going down, and I'm going to enjoy it.

And here are your early Roman Kings:

Romulus (mythical): 753-715 BC. Rape of the Sabine women.
Numa Pompilius: 715-673 BC. His adviser was a nymph. Peaceful reign.
Tullius Hositilius: 673-642 BC. Destroyed the Alba Longa.
Ancus Marcius: 642-617 BC. Expander of Rome, founder of Ostia.
Tarquinius Priscus: 617-579 BC. Not Roman, but Etruscan. Built the Cloaca Maxima, laid out the Circus Maximus. Conquered stuff.
Servius Tullius: 579-535 BC. Set up the class system based on wealth. Built a wall around the city.
Tarquinius Superbus: 534 BC-510 BC. He irritated the people. His son Sextus outraged Lucretia, who was married. 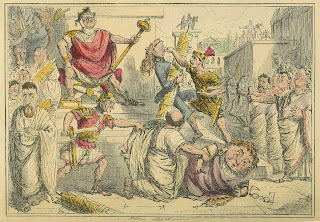 Posted by Robert MacMillan at 2:11 PM