Man shoots some dude
For no reason. Now he whines
Because he's in jail.

"Folsom Prison Blues" is what happens when your train song meets your prison song. In this case, Johnny Cash put them together while he was stationed in West Germany at the Landsberg air force base. It's a famous tale: guy is stuck in prison, sentenced for shooting a man in Reno "just to watch him die." His mother told him when he was young not to play around with guns, and it turns out she was right. Meanwhile, people on the train are rich and enjoying the good things in life. If our hero got out of prison, he would buy the train and move it down the line from prison. Who wouldn't?

Bob Dylan recorded this song during the Basement Tapes sessions of 1967. It's a rough take, as you would expect. 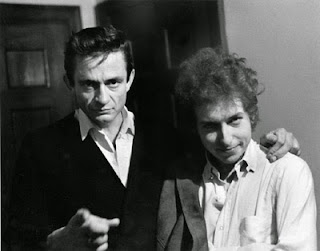 Posted by Robert MacMillan at 1:09 PM