Nothing is good here.
The only hope lies beyond,
Where it's unlikely.

"Gates of Eden" is the second song on side two of the 1965 album "Bringing It All Back Home." It's one of a series of surreal Fleurs du Mal-style songs, describing inner landscapes wracked by fever and populated by obscene or absurd characters, and illuminated by Dylan's cantankerous misanthropy. See below:

As for the haiku:
There are many bad things happening outside the gates of Eden.
- Twisting truth, a candle waxed in black and lit into the sun, the wailing babies in holes, the crash of "all in all," the complaining soldier, the barking dogs, Aladdin and the monks on the golden calf (idolators), promises of paradise (which must be false), people condemned to suffer succeeding kings, the screaming dwarf, wicked birds of prey who snap up the dwarf's tiny sins, rotting kingdoms, jealous poor people, the royalty taken up with the discussion of what's real (they are wasting their time), Bob's inability to ever find a home (he's always in a hot foreign place in someone else's room), and finally Bob's lover, who doesn't bother to analyze her dreams. This is all what's outside the gates of Eden. Inside sounds like it should be a paradise, but if you check it out, it doesn't sound like Bob is giving you a very hard sell. 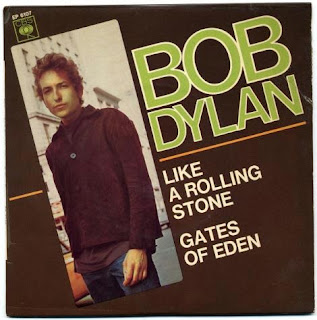 Posted by Robert MacMillan at 11:46 AM

Labels: 1965, Bringing It All Back Home, Gates of Eden