The Groom's Still Waiting at the Altar

There are times when you can't help but love Bob Dylan's mind and appreciate the mystery of how it works:

"What can I say about Claudette?
Ain't seen her since January,
She could be respectably married or running a whorehouse in Buenos Aires."

That he manages to put that into the galloping hard-rocker that is "The Groom's Still Waiting at the Altar" is a testament to his quicksilver tongue and his quicksilverer thinking (I can invent my own comparatives if I want). The song, a 1981 single that was added to later editions of "Shot of Love," is one of Dylan's best attempts to merge pop music with the evening news. The timing was good too. This song came out as the news began, at least in my mind, to enter the modern era of terrorism, dirty and less organized wars and the sophisticated coldness of the 1980s, when rock and roll singers started wearing suits and discovering that in the gleaming corridors of the 51st floor, the money can be made if you really want some more.

Dylan's tale is half complaint, half wire service report. What makes it click for me is his ability to shove out long sentences in single verses, hitting 20 or 21 syllables if not more at a time, and never making it sound like he was forcing too many words into the space:

1. We find him praying in the ghetto with his face in cement. There's a dying boxer, the massacre of innocents. A woman walking down the halls (away, presumably), as the walls fall apart.
2. Pure at heart = arrest for robbery. Shyness = aloofness. Silence = snobbery. How mad it is to become what you never were ment to become.
3. Claudette? Whatever I say can and will be used against me. I had to leave her as soon as she began to want me. God have mercy, I would have done anything for her if she weren't expecting it already.
4. Do I have a fever, baby? If you want something, take it. You might not be able to keep it.
5. Cities on fire, phones aren't working, fighting on the border, nuns and soldiers (hello Iris Murdoch!) getting killed. Claudette could be up to one thing or the other.

And the chorus, of course:

I see the burning of the stage,
Curtain risin' on a new age,
See the groom still waitin' at the altar.

Most people wonder whether the groom is supposed to be Jesus, who made a number of appearances on Dylan songs at the time, or whether he's Bob or someone else. We're here to have fun, not to figure out what Dylan really meant. I went with Jesus because it was the easy choice. There's also a quote from the Book of Revelations about the lamb getting ready for a wedding and the bride making herself ready. I wouldn't be surprised if the lamb -- an agent of God, a symbol for Jesus, a scapegoat, a sacrifice in the Old Testament and a human sacrifice in the New -- weren't what Dylan was referring to. 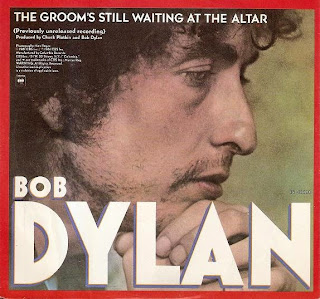 Posted by Robert MacMillan at 11:06 AM

Labels: 1981, Shot of Love, The Groom's Still Waiting at the Altar