Whatever your job,
You can choose one manager:
The Devil or God.

The opening song on the 1979 born-again-Christian-themed album "Slow Train Coming" is one of Bob Dylan's masterpieces. "Gotta Serve Somebody" makes clear that whatever you choose to do in your life, you're serving one master or the other, and if it's not God or the Devil, it's someone else. The argument cuts across class, race and every other way we slice up humanity. Dylan won a Grammy Award for best male rock vocal performance for this song.

Things you could be, while still having to serve somebody:

Names by which you might know Bob:
- Terry
- Timmy
- Bobby
- Zimmy
- RJ
- Ray
- Anything else you can think of 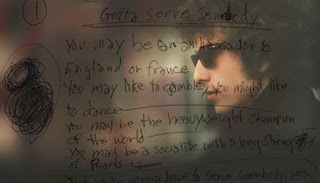 Posted by Robert MacMillan at 2:39 PM