Tweedle Dum & Dee:
Not exactly the best of friends
As the world ends.

Tweedle Dee and Tweedle Dum might have started off as the inhabitants of a farcical poem from the 18th century, but they became best known as the twins in "Alice's Adventures in Wonderland" and "Through the Looking Glass" by Lewis Carroll. Bob Dylan transforms them into a sinster duo who are sicker of each other than Lewis and Clark must have been by the time they reached Wyoming. He used them as the opening song on the 2001 album "Love and Theft" in a dark and twisted rock and roll song.

1. Tweedle-dee Dum and Tweedle-dee Dee workin' hard, throwing knives in a tree. They have two big bags of a dead man's bones.
2. They're trusting their fate to God. They're silently passing by.
3. They're take the streetcar named Desire to retire. They see a pecan pie. They want it, but they wouldn't buy it.
4. “His Master’s voice is calling me,” says Tweedle Dum to Tweedle Dee. Note that this is the old RCA-Victor slogan, with the image of a dog listening to the voice of his master coming from a Victrola that's sitting on the master's casket.
5. Dum to Dee: Your presence is obnoxious to me. Like babies on their mama's knee.
6. As for me, I'm in love with you for no good end. It's raining, and I've got boiling brains in the pot, dripping with garlic and olive oil.
7. Dee to Dum: Throw me a bone, please. Dum to Dee: What's good for you is good for me.
8. They have a kind of happy harmony, even though they're short on cash. They have a permit for their parade, which includes a police escort.
9. They run a brick and tile company.
10. "Well a childish dream is a deathless need, And a noble truth is a sacred dream." (From poet Henry Timrod)
11. "Tweedle-dee Dee is a lowdown, sorry old man. Tweedle-dee Dum, he’ll stab you where you stand. 'I’ve had too much of your company,' says Tweedle-dee Dum to Tweedle-dee Dee." 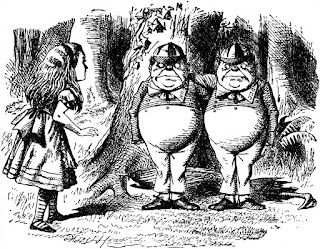 Posted by Robert MacMillan at 8:06 AM