Boxer dies in ring.
The boxing business is shocked,
Says, "It's not our fault."

Here's a song that Bob Dylan wrote in 1964 about the death of boxer Davey Moore, who suffered irreversible brain damage after a fight and never recovered. It's one of Dylan's journalism songs. It wasn't released until 1991 when it appeared on the first volume of the Bootleg Series. It's done in the style of "Who Killed Cock Robin?"

Alibis for suspects in the murder of Davey Moore:
Referee: I'm obligated to give the crowd the fight that it wants.
Crowd: We didn't show up for lethal actin. We came to see a bit of sweat, which is legal.
Manager: He should have said something if he were not feeling well.
Gambler: I just bet on the fight. I didn't hit him myself.
Journalist: Boxing isn't the only dangerous sport, you know. And I can't make boxing go away so I'm going to write about it.
The other boxer: I'm paid to box. This isn't murder, it's God's will. 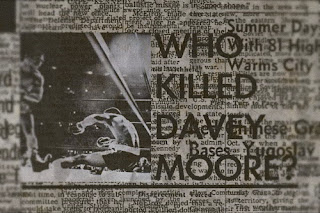 Posted by Robert MacMillan at 12:47 PM