When I Paint My Masterpiece

A slog through Europe
Makes Bob think one day he'll quit
And stay home and paint.

"When I Paint My Masterpiece" comes from a 1971 single, and was popularized, with slightly altered lyrics, by the Band, which released it on their album "Cahoots." Dylan wrote both sets of lyrics. It comes from a time when Dylan wasn't writing much, and apparently has said he was suffering from writer's block or a lack of inspiration or something like that. It's a great song with a simple piano riff that propels it along. In short, he's taking a trip in Europe, dealing with the various things a star deals with while trying to find a path to painting (or writing?) his masterpiece.

1. Ancient Rome, climbing the Spanish Steps, seeing double on a cold, dark night. Back to the hotel room where he has a date with Botticelli's niece. She said she'd be there when he paints his masterpiece.
2. He's been stuck in the Coliseum, "dodging lions and wasting time." That, to me, sounds like a stand-in for life in the music business.
3. Traveling around the world in a dirty gondola, wouldn't it be something to be back in the USA - "the land of Coca-Cola."
4. FCO --> BRU. It was a bumpy plane ride. Lots of uniformed clergy and young girls pulling muscles. (So say the lyrics, but I would have thought they were pulling mussels given that they're in Brussels) Lots of people showed up to welcome him, including unruly members of the press. One day, this will all be different. 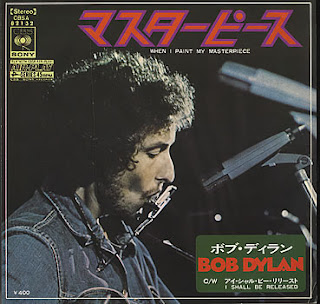 Posted by Robert MacMillan at 12:27 PM