When the Ship Comes In

When our ship arrives,
We'll drown our enemies and
Everyone will laugh.

Note to hoteliers, maitre d's and other gatekeepers: the next time you refuse Dylan service, he'll write a song about you. This song, according to Joan Baez and others, was a reaction to a hotel refusing to offer a room to Dylan because of his unkempt appearance. He got mad and wrote this song, which has a lot more than hotel tyranny on its mind. The song appears on the 1963 album "The Times They Are a-Changin'."

1. One day the wind will stop, just like before a hurricane. That's when the ship will come in.
2. The ship will shake the sands, sound the tide, start the wind and sail in on a new day.
3. The rocks will be proud, the seagulls will smile, and the fish will laugh as they make way for the ship. (I utterly despise this lyric. It sounds like rhyme grasping by a green songwriter, but what bothers me more is the depiction of happy, frolicking animals. I just... I don't know... I just don't like it.)
4. People will try to stop the ship with words, but it won't work.
5. The sun will respect the ship's crew.
6. The sand will roll out the gold carpet, and the ship's officers will let everyone know that the world is watching while they dock.
7. Our enemies will be shocked and amazed. They'll -- and this is another lyric that I hate -- "pinch themselves and squeal, and know that it’s for real, the hour when the ship comes in."
8. They'll raise their hands in surrender, but we'll drown them all anyway. 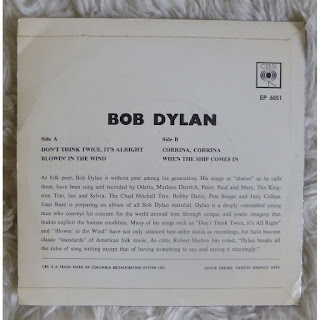 Posted by Robert MacMillan at 12:37 PM

Labels: 1964, The Times They Are a-Changin', When the Ship Comes In