I know where you are.
I follow a teardrop trail
And you're at the end.

I've always enjoyed the music of "Where Teardrops Fall," which comes from the 1989 album "Oh Mercy." I'm just not all that sure I know what it's about. If I had to guess, we're dealing with a broken-up couple, she's sad about it, he's sorry about it, and he's proposing a reconciliation. I went with a strictly literal interpretation for the haiku, and saved the guesswork for this miniature essay.

Notes:
1. You're hanging out where the teardrops fall. They're likely yours. Soft winds, far away.
2. It's past the stormy night and the wall. You're there in flickering light.
3. "We banged the drum slowly, And played the fife lowly, You know the song in my heart." This song refers to the cowboy song "Streets of Laredo," about a cowboy who's dying of a gunshot wound and requests that his chums play a funeral dirge as they carry him to his coffin. It's based on an older Scottish song about a young man dying because of mistreatment by maiden -- quite possibly a case of fatal syphilis. But that's another story. Dylan, meanwhile, suggests that his gal might show him "a new place to start."
4. "I’ve torn my clothes and I’ve drained the cup, strippin’ away at it all." I assume that the cup refers to the Last Supper. The clothes tearing is an old Jewish tradition to express grief, a broken heart and other unhappy emotions. It also expresses a devotion to God. Note that when Herod and the Romans mocked Jesus before nailing him to the tree, they made him wear expensive robes as an ironic expression of their view of him as "king of the Jews." The garments were seamless, so when the Roman soldiers decided to divide his possessions for themselves, they ended up not being able to rend the garment as that would have made it useless. Anyway...
5. If we met, we could toast the cutting of fences.
6. "I just might have to come see you, wWhere teardrops fall." 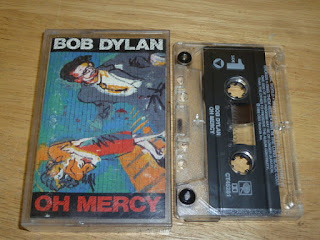 Posted by Robert MacMillan at 12:43 PM