Incompatible:
They seem to miss each other,
But remain apart.

I never expected a song written by Bob Dylan with soft ballad lyricist Carole Bayer Sager, but one exists. It's the last song on the album "Knocked Out Loaded" from 1986, and for an album so universally panned, it has its undeniable charm. But it's not a particularly happy song. It's one of the first of the "later-phase" Dylan songs dealing with unrequited love for a woman long gone.

- He was knocked out loaded when he noticed you. What a story!
- You know what he's like, and you know where to find him.
- "I’d like to help you but I’m in a bit of a jam. I’ll call you tomorrow if there’s phones where I am, baby, caught between heaven and hell."
- You'll never get rid of him.
- It's 4 a.m. and he's looking at your picture and thinking of things that you said.
- Wherever you go, you break someone's heart. You're too hot to handle. "I trusted you baby, you can trust me now."
- He's not leaving without a kiss goodbye.
- "Well the desert is hot, the mountain is cursed. Pray that I don’t die of thirst, baby, two feet from the well."\ 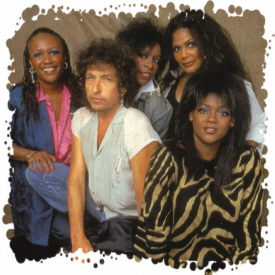 Posted by Robert MacMillan at 8:52 AM

Labels: 1986, Knocked Out Loaded, Under Your Spell