Tweeter and the Monkey Man

Cop chases dealers.
His sister loves one of them.
Welcome to Jersey.

This is the most ambitious of the songs on the first Traveling Wilburys album, from 1988, mainly because it’s a pure Dylan original. It’s one of those guys-on-the-lam stories involving some of the shadier and weirder members of the blue-collar professions, and perhaps in another universe could have belonged to Tom Waits or Barry Adamson. It also owes a bit to Bruce Springsteen (Highway 99, Thunder Road, the New Jersey setting, etc), who I imagine could have done this Nebraska-style if he wanted to.

The plot, in brief:
- Tweeter and the Monkey man are selling cocaine and has because they need money.
- They're selling it to an undercover cop, whose sister Jan for unexplained reasons loves the Monkey Man.
- Tweeter was a boy scout, then a Vietnam vet. Life's been cold to him.
- Tweeter and Monkey steal a car and take Highway 99 across the Jersey line (Bruce!)
- The cop hates the Monkey Man and wants to put him away.
- Jan married a racketeer named Bill at 14 and called the Monkey Man secretly from her hilltop mansion.
- Tweeter and the Monkey Man are on Thunder Road (Bruce!) and they run in to the undercover cop, who demands that they surrender.
- Ambulance and a state trooper arrive. Tweeter relieves him of his gun and "messes up his mind."
- They tie the undercover cop to a tree near an abandoned factory and a souvenir stand.
- The cop is pissed off, and now it's personal. He remembers Jan telling him, though, "It was you to me who taught
In Jersey anything's legal as long as you don't get caught."
- Tweeter and the Monkey Man run out of gas near Rahway Prison.
- Jan, at home, has a telepathic urge. She tells Bill, "'There's someplace I gotta go'. She took a gun out of the drawer and said, 'It's best if you don't know.'"
- The cop turns up dead, face down in a field. The police are closing in on Tweeter and the Monkey Man meanwhile. Monkey's on the bridge, using Tweeter as a shield.
- Presumably, they go down shooting.
- Jersey City's quieting down again. Bob's sitting there in a bar called the Lion's Den, thinking it's time to beat it for Florida. 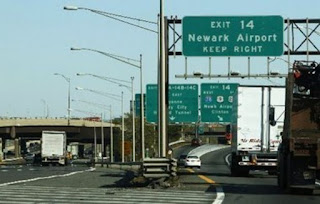 Posted by Robert MacMillan at 8:12 AM