Waltzing with sin is
Not the dance ticket you want.
It's not good for you.

I don't know who wrote "Waltzing With Sin." I've seen it credited to truck-driver songwriter Red Sovine as well as Mr. Hell-Raiser/Womanizer/Drinker/Born-Again Christian preacher Sonny Burns. Bob Dylan's version was recorded during the 1967 Basement Tapes sessions and is available on volume 11 of the Bootleg Series.

Someday you'll find
That the world's left you out
No true love, no nothing
Just roaming about

You're Satan made over
In perfect disguise
Unfaithful, unworthy
And oh so unwise 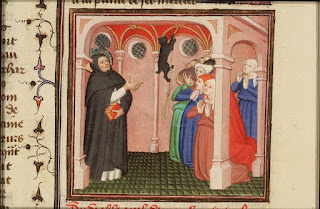 Posted by Robert MacMillan at 9:37 AM