Read by the river
Until you feel like writing.
It takes flow to flow.

"Watching the River Flow" appeared as a single in 1971, and was included on Dylan's "Greatest Hits, Volume II" album that same year. It's Dylan's description of writer's block, or a dearth of inspiration, or something like that. He wants to be back in the city with his lover, doing his thing, but until he's able to get the writing to flow, he's going to have to sit like Andrei Tarkovsky or some Buddhist monk and watch the river flow. That’s what flow motion is all about.

- "What’s the matter with me, I don’t have much to say."
- "If I had wings and I could fly, I know where I would go. But right now I’ll just sit here so contentedly, and watch the river flow."
- People everywhere are upset and disagreeing with one another. "Makes you wanna stop and read a book."
- The river keeps flowing regardless. 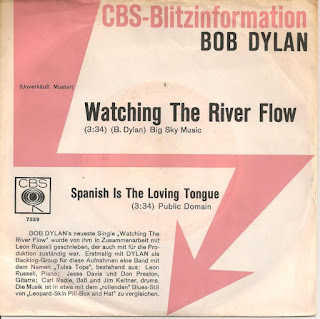