Bob knows what love is.
He also knows that you don't..
Don't dilute your love.

"Watered-Down Love" is a great song from the 1981 album "Shot of Love." It's only flaw, at least to me: it hectors some subject, unnamed. In that absence, it feels like he's hectoring YOU, the listener. But I tend to take things personally.

The right kind of love:
Hopes and believes all things
Doesn't pull strings
Doesn't sneak into your room
Doesn't make false claims
Helps you insted of blaming you
Won't deceive or lead you to sin
Won't demand false confessions
Won't lead you astray
Won't hold you back or screw up your day
Won't pervert or corrupt you
Won't make you envious or suspicious
It's always on time and content, burning quietly forever
It's not proud or yearning

The kind of love you want:
"You don’t want a love that’s pure. You wanna drowned love. You want a watered-down love." 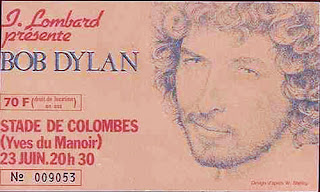 Posted by Robert MacMillan at 3:10 PM