Bob and Parson Brown
Take this jingle-jangle tune
For a brand new spin.

"Winter Wonderland": music by Felix Bernard, words by Richard B. Smith. Perry Como and the Andrews Sisters are but two of the many who have recorded this one. It appears on the 2009 Bob Dylan album "Christmas in the Heart."

Sleigh bells ring, are you listening,
In the lane, snow is glistening
A beautiful sight,
We're happy tonight.
Walking in a winter wonderland.

Gone away is the bluebird,
Here to stay is a new bird
He sings a love song,
As we go along,
Walking in a winter wonderland.

In the meadow we can build a snowman,
Then pretend that he is Parson Brown

He'll say: Are you married?
We'll say: No man,
But you can do the job
When you're in town.

Later on, we'll conspire,
As we dream by the fire
To face unafraid,
The plans that we've made,
Walking in a winter wonderland.

In the meadow we can build a snowman,
And pretend that he's a circus clown
We'll have lots of fun with mister snowman,
Until the other kids knock him down.

When it snows, ain't it thrilling,
Though your nose gets a chilling
We'll frolic and play, the Eskimo way,
Walking in a winter wonderland. 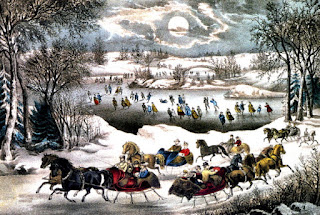