Bob is getting old
And the world has gotten worse.
And it’s not done yet.

Bob Dylan: the crown prince of resignation. Theme song: "Not Dark Yet." This melancholy look-back-on-life-at-dusk song defines Dylan's later-stage motive: summing up the highs and lows of life and their inextricable union. It's from the 1997 album "Time Out of Mind" which established this outlook that Dylan has brought to most of his music over what is now nearly two decades.

1. Sunset. Too hot to sleep. Soul turned to steel, but still plenty of scars.
2. No more sense of humanity. Pain accompanies every beautiful thing. She wrote him a letter, and she was nice about it while being honest.
3. Bob's been to London and Paris, the river and the sea. He's been on the bottom in a world where everyone lies. He's not looking for anything from anyone. "Sometimes my burden seems more than I can bear. It’s not dark yet, but it’s getting there."
4. You think he's moving, but he's standing still. He's numb, and "I can’t even remember what it was I came here to get away from. Don’t even hear a murmur of a prayer. It’s not dark yet, but it’s getting there."

The music soars under the able hand of producer Daniel Lanois, and despite its mere four verses, it's epic stuff. It's just not what you want on during your period periods of bitterness, regret and your seventh wine spritzer. 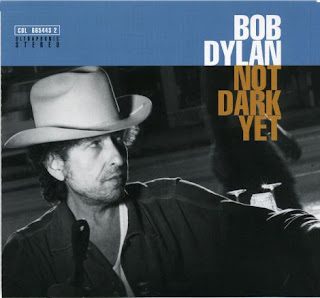 Posted by Robert MacMillan at 1:03 PM