Only a Pawn in Their Game

Black man killed down south,
Whites are caught in a web too.
Someone pulls their strings.

This is a song about the assassination of civil rights leader Medgar Evers. It examines the idea of individual responsibility vs collective evil in the perpetuation of racism in the United States, similar to the idea of individual operators in the Nazi death machine from 1933 to 1945. Are the individual criminals to blame? Or were they following orders? Or were they brought up that way by entrenched powers to act in a way that they can't control because it's in their breeding? Dylan seems to conclude that it's a mixture, though he makes an interesting defense of the poor, white, uneducated man who's manipulated by forces bigger than he is to behave in accordance with their ambitions. It would be interesting to get this song out there in public again more than 50 years after it appeared to see what modern audiences would make of it. You can find it on the 1963 album "The Times They Are a-Changin'."

A South politician preaches to the poor white man
“You got more than the blacks, don’t complain.
You’re better than them, you been born with white skin,” they explain.
And the Negro’s name
Is used it is plain
For the politician’s gain
As he rises to fame
And the poor white remains
On the caboose of the train
But it ain’t him to blame
He’s only a pawn in their game

The deputy sheriffs, the soldiers, the governors get paid
And the marshals and cops get the same
But the poor white man’s used in the hands of them all like a tool
He’s taught in his school
From the start by the rule
That the laws are with him
To protect his white skin
To keep up his hate
So he never thinks straight
’Bout the shape that he’s in
But it ain’t him to blame
He’s only a pawn in their game

From the poverty shacks, he looks from the cracks to the tracks
And the hoofbeats pound in his brain
And he’s taught how to walk in a pack
Shoot in the back
With his fist in a clinch
To hang and to lynch
To hide ’neath the hood
To kill with no pain
Like a dog on a chain
He ain’t got no name
But it ain’t him to blame
He’s only a pawn in their game.

Today, Medgar Evers was buried from the bullet he caught
They lowered him down as a king
But when the shadowy sun sets on the one
That fired the gun
He’ll see by his grave
On the stone that remains
Carved next to his name
His epitaph plain:
Only a pawn in their game 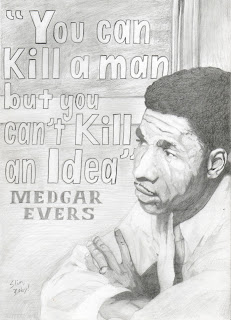 Posted by Robert MacMillan at 2:48 PM

Labels: 1963, Only a Pawn in Their Game, The Times They Are a-Changin'