Pay attention, girl.
Bob has time for you. It's you
He's not sure about.

I like the description of "Blonde on Blonde" that Andy Gill gave the album, one that I know about because of my repeated perusing of Wikipedia entries about Bob Dylan: "humid, oppressive atmosphere." He characterizes most of the album this way apart from the opening song "Rainy Day Women #12 & 35." Song two is "Pledging My Time," which was released as well on a single with the preceding song. It's a Chicago blues-style song, I'm told, though I don't know quite what that means other than that it's loud and electric. It's one of the first songs that Dylan recorded in Nashville in 1966, and it features the core of the band that would make the album so beloved, along with keyboardist Al Kooper and guitar player Robbie Robertson who joined him from New York. The song sounds like a take-off on the Robert Johnson blues song "Come on in My Kitchen," and I don't say that just because the Wikipedia entry says so. There are some direct references to the song in the lyrics, at least as far as I can tell. As for the haiku, I took a more stern approach than the song takes, but I felt that it was worth it to take a look at the song from a different angle. 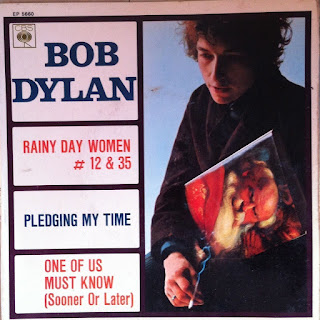 Posted by Robert MacMillan at 2:14 PM