Quit Your Low Down Ways

God and the White House
Won't put you on the right track.
That's a job for me.

This is a vague song about a woman who's doing things that apparently are "low down." Once she realizes that she will be punished for her behavior, she embarks on a variety of acts to atone for them, but the singer knows that none of those things are going to do the trick. He suggests that he might be the answer that she is looking for. The song was recorded in 1963, but did not get commercial release until 1991 when it appeared on the first edition of the Bootleg Series, which collected a number of unreleased studio recordings that Dylan taped between 1961 and 1989.

Things that won't absolve you of your low down ways:
- Reading the Bible
- Praying
- Going to the White House
- Looking at the Capitol
- Asking the president for a pardon
- Rolling around in the hot desert sand
- Swearing in a court of law
- Hitchhiking

What might help absolve you of your low down ways:
- Me 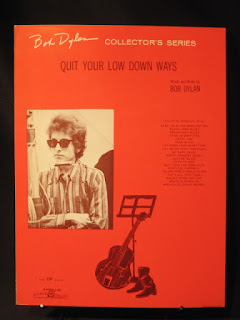