Boy pines for a girl
Who said she was not for him.
He never forgets.

This sweet, sad song was never released on any one of Bob Dylan's studio albums, but it did end up on volume 8 of the Bootleg Series, a compilation of alternate versions and unreleased songs from 1989 to 2006. This one is about a girl who as you guessed is from the Red River shore. The singer fell in love with her, despite all the pretty maids all in a row lined up outside his cabin door. He wooed and courted her, but she said to him "Go home and lead a quiet life." He never ended up with the girl, and even though the dream of having her died a long time ago, he has never been able to shake her loose from his mind. The problem is that there is no way for him to be happy except to be with her, so when he returns to the old town to find her, everyone says that they don't know who he is talking about. He then tells this story:

"Now I heard of a guy who lived a long time ago
A man full of sorrow and strife.
That if someone around him died and was dead,
He knew how to bring 'em back to life.
Well, I don't know what kind of language he used
Or if they do that kind of thing anymore.
Sometimes I think nobody saw me here at all,
Except the girl from the Red River Shore."

That leaves me wondering if he's the ghost or she is... or if they both are. 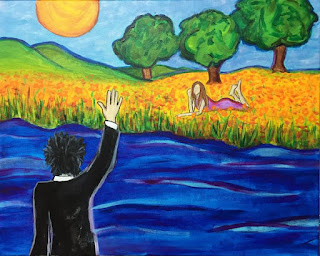 Posted by Robert MacMillan at 6:57 PM