You gotta let go
Of some folks to survive, but
You still will miss them.

"Shooting Star" is a fantastic, bittersweet ending to the always-interesting 1989 album "Oh Mercy." I suppose that you could read it on any level that you want, but the two most common ones seem to be:

The song goes for the gut, emotionally speaking, given its backdrop of the universe and eternity and the twinkling stars from thousands of light years away. What better than a quiet night lost in the stars and in the throes of gentle regret years after a failure to connect with someone, thinking about what you could have done differently? On a different level, I always considered the shooting star as a symbol for someone who was too high, wild and fast to catch, but who would occasionally land in your yard -- but who would prove impossible to keep. And even more than that, I always considered the shooting star to symbolize someone who was not just all these things, but who was too bright to survive in the dull world, and streaked across the sky until they burned out, usually at the cost of their life. I cannot possibly load so much baggage onto the song for your sake, but I do when I listen to it.

Meteor shower:
1. Shooting star/you. I saw you were trying to break into another world. I wonder if you did.
2. Shooting star/me. I wonder if I performed to your expectations or if I "missed the mark." (This refers to the quote about the fine line between God's patience and his wrath)
3. The fire truck from hell, with its engine and its bell. People are praying. Last temptation, last judgment, last Sermon on the Mount. The last broadcast.
4. Shooting star/us. Tomorrow is another day to remember that it's too late to tell you what I should have told you and what you needed to hear. "Seen a shooting star tonight slip away." 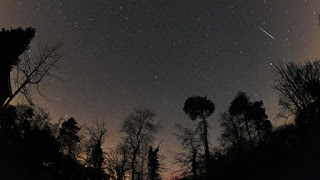