The meaning of life:
Family yes, girlfriend no, go
Fishing, catch some trout.

This is a knockout song from an album that I already love from stem to stern, 1970's "New Morning." I've read accounts that say this song is about domestic bliss, and while I think that this is true in part, I sometimes wonder if Dylan's expressing doubt just underneath the sentiment. I don't have any reason to say this other than parsing the phrase that he sings regarding raising some kids, being married, having a cabin in Utah and fishing for trout: "That must be what it's all about." That's an observation more than an affirmation, at least to me. But what about the rest of the song?

Verse 1:
Signs say the following things: Lonely, no company allowed, You don't own me, Three's a crowd. If this is about marriage, then I suppose all those might apply to various phases of that domestic arrangement.
Verse 2:
A woman and her boyfriend "change their tune" and go to California. Then Bob's best friend says, "Now, didn't I warn you, Brighton girls are like the moon." I guess that this is some reference to the single life and its discontents. Or something else. What do I know.
Verse 3:
The weather report. It's raining tonight on Main Street. Hopefully there won't be sleet.
Verse 4:
Utah, cabin, wife, kids, trout, life. 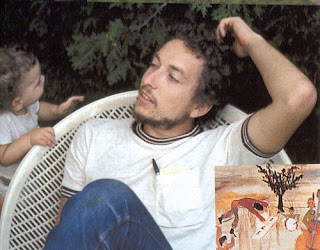 Posted by Robert MacMillan at 2:29 PM