Bob finds out how big
Woody Guthrie's shoes are, and
Prepares to fill them.

This is Bob Dylan's salute to Woody Guthrie, the folksinger who provided so much of Dylan's early inspiration, not to mention his image of a wandering troubadour chronicling the America of his times. He mentions that he's been wandering around the USA as well and acquainting himself with the things that Woody has seen. He offers his world-weary comments on a weary world, notes that Woody probably knows all this stuff already, and tips his hat to other folk musicians such as Leadbelly and Cisco Houston. He says he's going to keep traveling, and hopes that it won't be hard. The song appeared on Dylan's debut album, which was released in 1962. 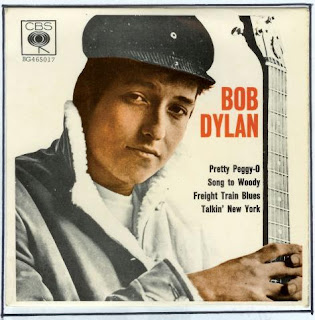 Posted by Robert MacMillan at 5:58 PM