Standing in the Doorway

Woman breaks Bob's heart.
He shouldn't take her back, but
He probably will.

Many of Dylan's relationship elegies, committed to tape and released years after the relationships themselves, are masterpieces in how they reflect on the passage of time doing little to dim some torches that we carry. "Standing in the Doorway," from the 1997 album "Time Out of Mind," is a less charitable song than some. In this one, the singer remains bitter about how the woman left him in the lurch years ago, "standing in the doorway, crying." He goes on like that:

- Time used to move too fast. Now it moves too slow.
- Nothing left to do.
- He might kiss you or kill you if he sees you. Not sure which. It wouldn't matter.
- He has nothing to go back to now.
- Laughter makes him sad.
- The ghost of your old love is still here. It won't go away any time soon, it looks like.
- There are things that he could say, but doesn't.
- He senses God's mercy.
- He would be crazy if he took you back.
- For whom are those funeral bells tolling?
- Last night he danced with a stranger, but it just made him think of you.
- There's no point in explaining. 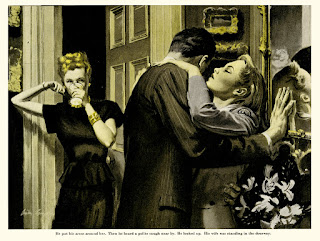 Posted by Robert MacMillan at 9:29 PM

Labels: 1997, Standing in the Doorway, Time out of Mind