Stuck Inside of Mobile With the Memphis Blues Again

Bob's stuck in Mobile,
But it feels like Tennessee.
Happens all the time.

This is one of Bob Dylan's best songs, and is one of the times that his surreal, Fellini-style cast of characters all did him right. I know that some of his best-known songs are cascades of surrealism and symbolism and familiar characters from fiction and history doing unusual things for obscure reasons, but it all really works the way it should in this song. It doesn't take itself too seriously, and is mellow in a way that many of his other fever-dream songs are not. Maybe it was the Nashville studio musicians with whom he recorded the song for the 1966 album "Blonde on Blonde." For me, it is the highlight of the album. As for what it's all about? Don't ask me. I didn't even go beyond the chorus. That was enough. But the rest of the song is an obscurantist's delight.

Samples of the song:
- The ragman won't tell us what's wrong as he draws circles up and down the block.
- The ladies are kind and give Bob tape.
- Shakespeare's wearing pointed shoes and bells in an alley where he's chatting up a French girl who says she knows Bob. She hasn't said anything else though it's unlikely that Bob can prove this because the mailbox was locked and someone stole the Post Office. (One of the absurdities that creeps into the song. The other is the brakeman in the next verse who smokes Bob's eyelid and punches his cigarette.)
- Mona says stay away from the brakemen because they drink your blood like wine. Bob says he wasn't aware of this, and that his only brakeman encounter was the one just mentioned.
- Grandpa died. It had to happen after he built the fire on Main Street and shot it with a gun.
- The senator is in town for his son's wedding. He has a gun too. Bob didn't get a ticket to the wedding and ended up under a trunk.
- Bob shows the preacher that they're not too different from one another. The preacher, curiously, is wearing 20 pounds of headlines stapled to his chest.
- He asked a rainman for a cure. He got Texas medicine and railroad gin. His outlook has been fairly dim ever since.
- He gets an invitation to watch her dance under the Panamanian moon in her honky-tonk lagoon. He protests that he's dating a debutante, but Ruthie suggests that perhaps she knows what Dylan really wants.
- Neon madmen climb on bricks lying on Grand Street. Bob wonders what it would take to get him out of having to do all this stuff again. 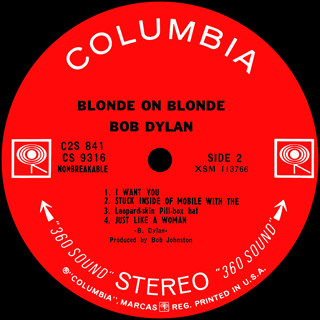 Posted by Robert MacMillan at 10:55 PM

Labels: 1966, Blonde on Blonde, Stuck Inside of Mobile With the Memphis Blues Again