Bob tells his doctor,
"I dreamed about a world war."
"So did I," doc says.

"Talkin' World War III Blues" is a fascinating, funny and dark song about a dream life in New York City after a war. It appeared on the 1963 album "The Freewheelin' Bob Dylan." Lyrics republished here without further comment.

Some time ago a crazy dream came to me
I dreamt I was walkin’ into World War Three
I went to the doctor the very next day
To see what kinda words he could say
He said it was a bad dream
I wouldn’t worry ’bout it none, though
They were my own dreams and they’re only in my head

I said, “Hold it, Doc, a World War passed through my brain”
He said, “Nurse, get your pad, this boy’s insane”
He grabbed my arm, I said, “Ouch!”
As I landed on the psychiatric couch
He said, “Tell me about it”

Well, the whole thing started at 3 o’clock fast
It was all over by quarter past
I was down in the sewer with some little lover
When I peeked out from a manhole cover
Wondering who turned the lights on

Well, I got up and walked around
And up and down the lonesome town
I stood a-wondering which way to go
I lit a cigarette on a parking meter and walked on down the road
It was a normal day

Well, I rung the fallout shelter bell
And I leaned my head and I gave a yell
“Give me a string bean, I’m a hungry man”
A shotgun fired and away I ran
I don’t blame them too much though, I know I look funny

Down at the corner by a hot-dog stand
I seen a man
I said, “Howdy friend, I guess there’s just us two”
He screamed a bit and away he flew
Thought I was a Communist

Well, I spied a girl and before she could leave
“Let’s go and play Adam and Eve”
I took her by the hand and my heart it was thumpin’
When she said, “Hey man, you crazy or sumpin’
You see what happened last time they started”

Well, I seen a Cadillac window uptown
And there was nobody aroun’
I got into the driver’s seat
And I drove down 42nd Street
In my Cadillac. Good car to drive after a war

Well, I remember seein’ some ad
So I turned on my Conelrad
But I didn’t pay my Con Ed bill
So the radio didn’t work so well
Turned on my record player—
It was Rock-a-day Johnny singin’, “Tell Your Ma, Tell Your Pa
Our Love’s A-gonna Grow Ooh-wah, Ooh-wah”

Well, the doctor interrupted me just about then
Sayin’, “Hey I’ve been havin’ the same old dreams
But mine was a little different you see
I dreamt that the only person left after the war was me
I didn’t see you around” 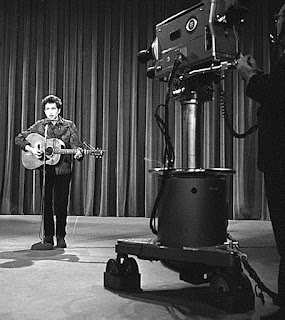