Achilles stands guard
Over my true love. I wish
I knew his weak spot.

Some women are hard to get, even if you're one of the most prominent rock n' roll stars on the planet. So Bob Dylan discovers and relates in the 1966 song "Temporary Like Achilles," which appeared on the "Blonde on Blonde" album.

1. He wants her loving, but she's so hard. He's standing on her window, where he has stood before, and wondering why she doesn't send him any regards. I'll refrain commenting on why he's looking at her "second door" and what that is.
2. He's beneath her ceiling, significantly kneeling, and trying to read her portrait. He can't because he's helpless "like a rich man's child." She sends someone out to prevent him from entering.
3. Is her heart made from lime, stone or solid rock?
4. He leans on her velvet door. (Again with the door!) He watches her scorpion and wonders what she is guarding.
5. She's gotten Achilles to guard her. Ask anyone in the Iliad why that might seem intimidating to Bob. And if you get a chance, tell him where the poor swordsman is vulnerable. 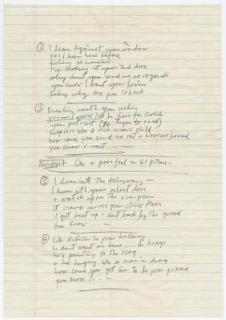 Posted by Robert MacMillan at 8:57 AM