One More Cup of Coffee

The full story on "One More Cup of Coffee" from the 1976 album "Desire" is more fleshed out than the haiku. She's a wild gypsy of a woman, uneducated yet beautiful, desirable, mysterious, unknowable and wild. And however much our singer wants her, he can't have her, so he's leaving. She seems to be ready to give him one thing, at least, and that's coffee. Or maybe he's made it himself. I don't know, but I've decided that the lyric is ambigious enough to suit the haiku.

Her:
Sweet breath
Eyes like jewels in the sky
Straight back
Smooth hair
No affection, gratitude or love
Loyalty to the stars, not to him
Dad's an outlaw and a wanderer
He knows how to throw knives and plans to teach her the same
He's a xenophobe
He's weak, presumably old, and hungry
Sister, mother and she can see the future
She has no education, can't read or write
No books
She knows how to have a good time
She has a voice like a meadowlark
Her heart is like the ocean ("mysterious and dark") 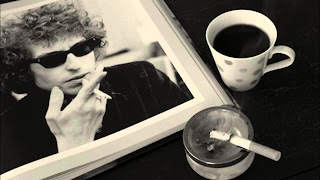