The saints ring their bells
For the world's lost and found
In moral decay.

The 1989 album "Oh Mercy" could have been such a soft tread through the landscape of adult contemporary neo-folk, even as the genre was just being born. Songs like "Ring Them Bells" made sure that this wasn't the case. Given that producer Daniel Lanois put a heavy stamp on each song, sometimes for good and sometimes for not quite as good, this one benefits from the restrained hand. Even though Dylan was working with a band and a producer who brought a particular sound that was theirs, he made this one his own with their accents rather than their entire signatures. If I had to guess, I would say the song is a plea to the saints and to the true wise men and women of religion who know why religion exists, to ring the bells of truth and goodness in a world that doesn't want to hear them. As such, they ring quietly and insistently, tolling a truth for a wounded world that needs the right path more than ever, but without commanding listeners to come. These bells are the small, clear voice that suggests a path to redemption, righteousness and paradise in a world where there is little demand for that path. The even, soft tone of the song indicates that patience, not fury at the oncoming apocalpyse, is the right way to react to a world out of balance.

1. Ring the bells, heathens, in the city of dreams and across valleys and streams. Do it because the waters are dark and deep and the world is off its kilter.
2. St. Peter, ring the bells with a steady hand. "Oh its rush hour now, on the wheel and the plow, and the sun is going down upon the sacred cow." To me, that says that people are rushing and speeding to keep their hand on the gospel plow, as the old spiritual says, the straight path to the Lord and to redemption, though you can't rush being right and being true. Even so, people are trying, which means they're trying for their selfish gain, an attempt to save themselves, when the true path to salvation lies in a good heart and good intent, not in trying to make sure you know all the answers for the test the night before when you've not tried all semester. Same goes for the sacred cow, upon which the sun is setting. This is the false idol that the Jews worshipped when they turned their backs on God during their 40 years between the bondage of Pharaoh and the establishment of themselves as a proper state. This was their period of doubt, and it's no wonder that they turned to more expedient means of salvation. But those means were wrong, according to the Bible, and possibly to Dylan.
3. Martha, perhaps of Mary and Martha in the New Testament, the women who gave shelter to Jesus, should ring the bells for the poor. Only the chosen people will hear them. They will know that God is one, even though they wander lost through the mountains now like sheep.
4. Ring the bells for the people who are chosen and who are damned, and for the people who are too blind and deaf to know which ones they are. Judgment day is coming, and someone needs to provide mercy and love for the child who "cries when innocence dies." 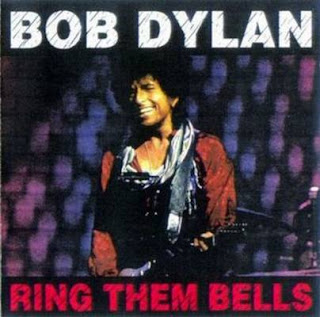 Posted by Robert MacMillan at 9:24 PM