Bob doesn't get her.
There's something about Rita:
She has a strong mind.

So here's a strange little song. "Rita May" was recorded in 1975 and released in 1976 on the B-side of a single whose other side was a live version of "Stuck Inside of Mobile With the Memphis Blues Again." The song doesn't say it for sure, but it sounds like a paean to Rita Mae Brown, the author who, as Wikipedia helpfully notes, at the time claimed that there was a dearth of opportunities for casual lesbian sex. I don't know what Dylan's intent was, but this silly little song ended up relegated to the Dylan dustbin of history. I suspect that it was a candidate for the "Desire" album, but he left it off. Its only appearance on an album that I know of was on "Masterpieces," a 1978 collection of greatest hits and a few obscure numbers that didn't find a home anywhere else. The collection was released in Japan and Australia, guaranteeing that the song would remain obscure to all but a few.

1. Rita May got her body in the way. She's nonchalant, but Dylan wants her body. What's he going to do? Make a lesbian reconsider her options? She makes him huff and puff.
2. How did she get this way? Doesn't she ever see the light, or does she ever get scared when she doesn't see it? Either way, she has Bob burning and turning. He must be learning someting.
3. His friends say he'll go blind if he keeps hanging around with you. But when you hold him, there must be something deep that you're thinking of.
4. Rita's lying in a stack of hay. What's she doing there? "I'm gonna have to go to college 'cause you are the book of knowledge, Rita May."

I don't have access to a video of Dylan's song, so I must share this somewhat muffled Jerry Lee Lewis version. 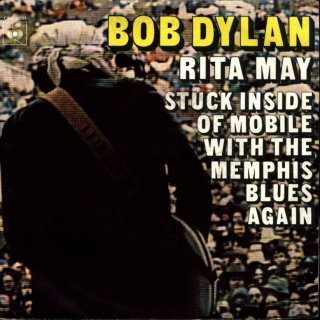 Posted by Robert MacMillan at 10:11 PM