Sad-Eyed Lady of the Lowlands

Sad and hollow-eyed.
If this is the lady you want,
Sing for her.

Some people consider "Sad-Eyed Lady of the Lowlands" to be an epic, classic ode to love. And it is. That still doesn't change my view that it's an interminable song stuffed full of references to things and people that most people shouldn't be expected to get. Still, Dylan scholars have spent lots of time breaking this one down. It was released on "Blonde on Blonde" in 1966. It is commonly seen as a wedding song of sorts for his then-wife Sara. The song stretches over 11 minutes and 22 seconds, and is divided into five verses. Here are some useless attempts to flick at them. I think, by the way, that the effect is supposed to be cumulative: she's a detailed portrait of an ethereal woman with her own unknown motives and desires, and is misunderstood by all who try to coopt her into supporting their various causes. I can only guess that Bob is supposed to be one more of these suitors, but one who thinks he might have an advantage.

Other people who show up in the song:
- A sad-eyed prophet
- The kings of Tyrus who wait in line for a geranium kiss, though they don't JUST want to kiss her.
- Farmers and businessmen who show her the dead angels that they used to hide, though it's hard to undertand why they picked her to sympathize with them.
- The child of a hoodlum in her arms
- The ex-husband in publishing 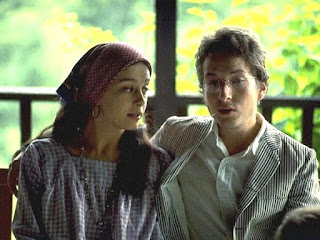 Posted by Robert MacMillan at 10:14 AM

Labels: 1966, Blonde on Blonde, Sad-Eyed Lady of the Lowlands