Bob's rolling along.
They say he's a washed-up star.
He thinks he's feisty.

"Summer Days" is undoubtedly a fine song, though it seems to be a collage of stories that form some new shape when viewed from afar rather than one narrative. But that's OK. This is a hallmark of Bob Dylan's more recent work. This one comes from the 2001 album "Love and Theft." I failed to capture the spirit of defiance and spunk that comes through in this song, as Dylan lets us know that the summer days are gone, but he knows where there's still a party going on, but at least I mentioned its existence in the poem. Here is the rest:

- He has a house on the hill and pigs in the mud. His girlfriend has royal Indian blood.
- He's standing on the table, proposing a toast to the King with a capital K, like Elvis king, or maybe he's the Indian king.
- A bunch of girls tell him he's a worn-out star as he drives the flats in his Cadillac. "How can you say you love someone else when you know it's me all the time?"
- You can't see the land, the fog's so thick. By the way, what good are you if you let some old businessman bully you?
- Wedding bells and a choir. "What looks good in the day, at night is another thing."
- Is this his wedding? She's looking at him and holding his hand and saying, "You can't repeat the past." He quotes F. Scott Fitzgerald: "You can't? What do you mean you can't? Of course you can!"
- Someone asks him where he's from and where he's going. He says he doesn't need to tell them. He refers to his lifelong position of living defensively, then suggests sarcastically that she "break his heart one more time, just for good luck."
- He's riding his car with all eight carburetors activated, but his gas level is low and his motor is beginning to stall.
- His dogs are barking. Someone must be near the house. His hammer is ringing, but his nails aren't going in. I can only assume that this is a sex thing.
- Want to say something? Say it or shut up. If you want to know about him, go ask the chief of police.
- Politician has his running shoes on. He must be running for something. "He's been suckin' the blood out of the genius of generosity."
- He's in the presence of God, or at least near God's river. His soul is beginning to shake as a result of this.
- He's leaving in the morning as soon as the dark clouds disperse. He's going to burn his house down before he goes, just as a "parting gift." 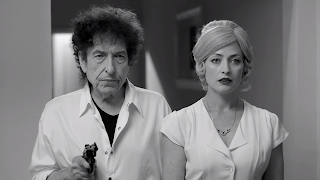 Posted by Robert MacMillan at 11:09 PM