Sweetheart in a dump
Should be at home with her man
Instead of with Bob.

I've never quite understood what's going on in this song from "Infidels," Bob Dylan's politically charged 1983 album. I like the music, the band is hot, and the atmosphere works, but who is the singer to tell a woman where she should be rather than where she is? (Refrain: "What's a sweetheart like you doing in a dump like this?") After all, if it's such a dump, what's he doing there, wherever there is? It reminds me of the great moment in Mel Brooks's 1968 movie "The Producers" when the great conman and faded Broadway producer Max Bialystok tries to lighten up the uptight accountant Leo Bloom. Max takes Leo out for a day in Manhattan, and they end up in the boat pond in Central Park, sitting on a row boat with their pant legs rolled up and dangling their feet in the water. Leo is nervous, and says, "What if someone from the office should see me?" Max replies: "And they'd see you. And you'd see them. And what are THEY NOT DOING IN THE OFFICE?"

Or maybe it's not sexism. I read on Wikipedia that some people have claimed that Dylan is addressing the church, but I would discount that as the amount of attention that hardcore fans put into each lyric, often deciding that there's 20% more in a song than the writer likely intended. I submit that the "dump," if anything, is planet earth. Evidence:

"You know, news of you has come down the line even before you came in the door. They say in your father's house, there's many mansions, each one of them got a fireproof floor."

"Got to be an important person to be in here, honey, got to have done some evil deed."

That line plays on the theme of reincarnation. I was going to say that perhaps the sweetheart in question was Jesus, and that Dylan was singing slyly to a savior with flaws, but I think this sweetheart is some more ethereal figure who is supposed to remain deliberately obscure.

Unrelated to anything, I love the working title of this song when they were rehearsing in the studio: "By the Way, That's a Cute Hat."

- The "boss" left after sundown and went north, the victim of his own vanity. I have no idea what this means, but to me the boss is God. And I risk falling prey to the same armchair analysis of Dylan's work that I was referring to above. Meanwhile, Bob appreciates her hat and her smile, but wonders what she's doing in a place like this.
- He knew a woman like you when he was younger. She called him "sweet daddy." He offers her a tip on how to play a card trick, and says she needs it to survive in this game (life).
- She should be at home where she belongs... "Watching out for someone who loves you true, who would never do you wrong. Just how much abuse will you be able to take? Well, there's n o way to tell by that first kiss."
- She could, if she decided she had the ambition, make a name for herself and be known as "the most beautiful woman who ever crawled across cut glass to make a deal." Again, I'm at sea with this.
- People are jealous of her, and compliment her to her face while "hissing" behind her back.
- Bob refers to quotes about patriotism being the last refuge of a scoundrel, as well as to petty thieves (criminals) and big thieves (the capitalist financial/political establishment), and before asking her one more time what she's doing in this dump, he notes that the next step down from this life is the "land of permanent bliss." 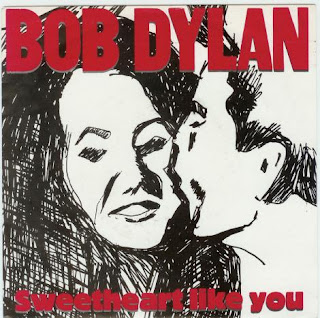 Posted by Robert MacMillan at 11:12 PM