Man buys animals
That can't possibly exist.
Then he plays with them.

I would think that "Tattle O'Day," which surfaced on the Bootleg Series in 2012 when Sony/Columbia released the recordings from Dylan's 1969-1970 "Self-Portrait"/"New Morning" studio sessions, was meant as a children's song. But that doesn't make it perfectly charming for adults. This song, which I think was written by Eric Andersen, contains the following:

- A little brown dog. He can whistle, sing, dance and run. His legs are 14 yards long, allowing him and the singer to go around the world in 12 hours.
- A four-inch-tall bull whose lowing shakes London to the ground.
- A flock of sheep of all wethers who produce wool and feathers. They also bring him lots of "increase" as they give birth to lambs and geese every autumn and every time the moon changes.
- A four-acre box that the singer carries in his pocket, having filled it with silver and guineas that he saved up to buy himself a trip to Turkey.
- A speckled hen who sits on an oyster until out springs a 15-hands-high hare. 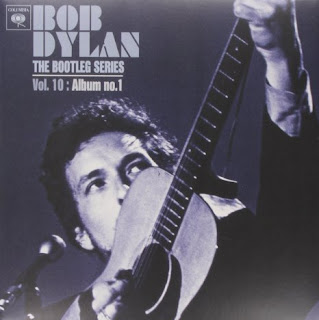 Posted by Robert MacMillan at 8:29 AM