Family grieves about
A daughter whom they raised right,
But turns out wrong instead.

"Tears of Rage" is one of those songs that Dylanologists love to pore over and extol. And you know, it's probably worth it in this case. This three-verse dirge for a wayward daughter -- or maybe a wayward country -- that has resisted or ignored all attempts to give it a good upbringing, and has most decidedly gone bad. Some see in this song a scolding of the United States, brought up on high ideals and a dream, ripping itself apart over a useless war, betrayal of those ideals, and an obsession with the enrichment of wealth.

Verse 1: They carried her in their arms on Independence Day, but now she throws them aside. What kind of daughter would do that to her doting father? "Tears of rage, tears of grief, Why must I always be the thief? Come to me now, you know we're so alone, and life is brief."
Verse 2: They gave her instructions and wrote her name in the sand (like the shifting sands of time), but she saw it as only a convenient place for her to stand. When she discovered that there were no true people, no true ideals, they stood around and watched and thought she was just acting like a child.
Verse 3: It didn't hurt, they didn't notice, when she filled her head with false instruction. "And now the heart is filled with gold as though it was a purse, but oh what kind of love is this that goes from bad to worse?" 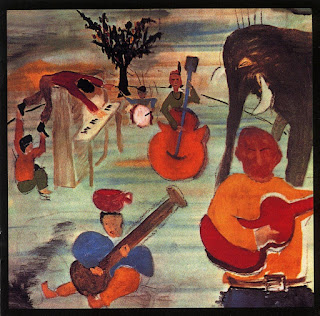 Posted by Robert MacMillan at 8:33 AM