What is wrong with her?
Something's on her mind, but she
Won't tell him what gives.

"Tell Me Momma," which debuted in 1966 as part of Bob Dylans touring act, was released commercially only in 1998 on volume four of the Bootleg Series, a recording of him and the Band in concert at the Manchester Free Trade Hall. It uses a number of old blues references to as a basis for the singer to ask his gal what's wrong with her.

- Ol' black Bascom (don't break no mirrors)
- Cold black water dog (make no tears)
- Don't you love me still? You have a steam drill and you want a kid to make it work for you like John Henry's hammer, so something is on your mind.
- Verse 2 has the weird stuff: "Spend some time on your January trips. You got tombstone moose up and your graveyard whips."
- Verse 3 contains an exhortation to "bone the editor," which I fully endorse. He's not reading, and his painted sled (Charles Foster Kane? Hearst?) is actually a b ed.
- She's close to the window ledge, now why would she want to jump? "For I know that you know that I know that you know, Something is tearing up your mind." 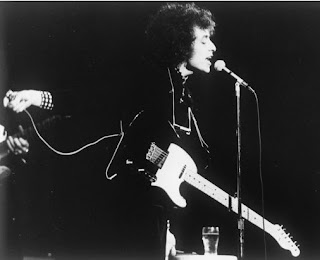 Posted by Robert MacMillan at 8:41 AM